Jacob’s visually arresting art comes from the heart. In his own words:

My name is Jacob Maskin. I am 13 years old and was born and raised in Arizona. I had my Bar Mitzvah this past year at Congregation Beth Tefillah with Rabbi Pinchas Allouche. I was inspired two years ago to start learning more about the Holocaust during a trip to Israel. There I visited the Holocaust Museum Yad Vashem in Jerusalem. My family lost many members who perished in the concentration camps of the Holocaust. My grandparents share stories every Jewish Holiday that I find very emotional and impactful. This past summer I started working on charcoal series that I called the Holocaust Series and I found out about this special opportunity through the Phoenix Holocaust Association where I can enter into an Arts Competition to commemorate the Holocaust. I felt this was “bershert” for me to create an art series that shows aspects of the Holocaust that stick with me when I see images from old photos.

The first drawing was done in charcoal and graphite pencils and it is called “The Train”. The image is of a wooden train carrying Jewish families through mountains on the way to a concentration camp. Here I worked on practicing perspective and shading and I tried to make the train appear weathered like old wood. I framed the image in a Jewish Star as the train was going through the heart of the Jewish Star of David.

The second drawing was done in charcoal and graphite pencils and it is called “The Camp”. This is an image of a concentration camp front entrance that I have seen in old photographs before. It is where the train would drop the families off before they go into the camp, separating the families. I tried to show the parts of the image that stood out to me, which was the cold plain building and desolate grounds leading up to the building. I tried to work on perspective here through the train tracks and worked on creating depth through shading the tracks. I made the sky dark behind to show the darkness of the events.

The third drawing was done in charcoal and graphite pencils and it is called “The Graves”. This is an image of a Jewish Cemetery in a dark, secluded forest at nighttime. The graves are unmarked since many Jewish People were forgotten. The fence has barbed wires like the concentration camps and the entry has a metal wire shaped into a Jewish Star. The one large grave in the middle has the term “Jude” which was a required pin that all Jews had to wear on their chest. The actual meaning of the word, Jude, is “Praised” so I thought it was a strong word and symbolic to place on the center grave.

I hope you enjoy my art. I learned a lot about the Holocaust while drawing these images and discussing them with my family. Thank you for giving me the opportunity to share my art with you and to recognize the Holocaust in my own way.” 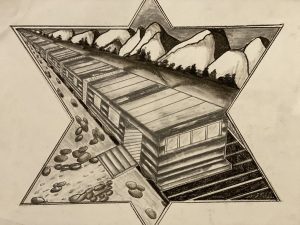 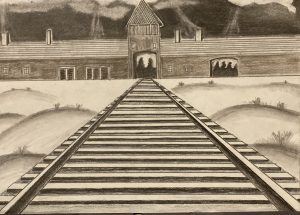 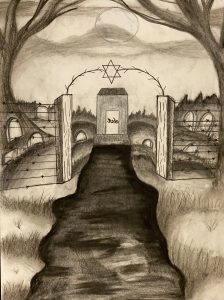